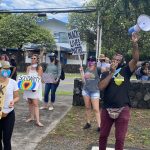 Protesters posted up outside the Kona Public Library for a rest during their march through Kailua Village on Saturday, June 13, 2020. PC: Max Dible 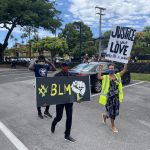 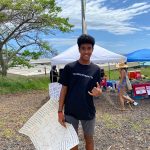 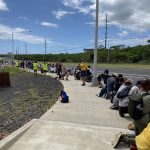 Protesters take a knee on silence for 8 minutes and 46 seconds at a Black Lives Matter protest in Kailua-Kona on Saturday, June 13, 2020. PC: Max Dible 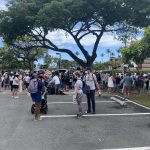 Protesters take a rest in front of the Kona Public Library during their march through Kailua Village Saturday, June 13, 2020. PC: Max Dible

A Big Island teenager is moving to take control of his future before anyone can step in to take it from him.

Dozens of protestors took to West Hawai‘i streets Saturday afternoon, marching through Kailua Village in solidarity with Black Lives Matter demonstrations across the world, in an event organized by 14-year-old activist Cody Jones.

“Looking at this now, I don’t want it to happen in my future or my kids’ future,” said Jones, who will start high school at Kealakehe in the fall. “I thought if I took a stand now, it would create a different future for me, and maybe a better one for everyone.”

Jones said he started by creating a flyer for the protest event, after which supportive individuals began reaching out to him and offering their help. At its peak, the demonstration attracted upwards of 100 people who carried signs decrying police brutality and the death of George Floyd, who was killed by a Minneapolis police officer while handcuffed.

Chants of “Black lives matter,” and “All lives can’t matter until black lives matter,” bolstered by drum beats, could be heard throughout Kona Saturday as protestors marched peacefully down its major thoroughfares, including Kuakini Highway and Ali‘i Drive.

“It’s been great seeing family come out to fight for what is right,” said Eugene Boadi, a demonstrator originally from Ghana, who was attending his second BLM protest on the Big Island.

Daniel Laryea, also from Africa, said the experience of being black in America isn’t always uniform. For people like himself, Boadi and Dexter Edwards, who is from the Caribbean, there’s the extra layer of being an immigrant living in the United States.

“It is different than for black people born here,” Laryea said. “I lived in a place where I never had to fear because of my skin color. But then you come here, and you realize it’s different. As compared to someone who was born here, that’s what they’ve always known.”

Edwards said the black experience in America also varies from state to state. He’s been living in Hawai‘i for 12 years but made his home in Minnesota before that and still has family living in New York City — both of which are places where protestors and police have clashed, sometimes violently, since demonstrations began in late May.

He added he’s generally had positive interactions with police since arriving in Hawai‘i, some of whom he plays soccer with and considers friends. While living in Minnesota, however, his relationship with law enforcement was more tenuous and adversarial.

“Three different times I had to go to jail overnight on the mainland for ‘talking back,'” Edwards explained. “They’re just trying to hassle you. You ask them why. They think you’re being rude, and the next thing you know, you’re in handcuffs. You’re in for probably a couple of hours. They’re just trying to make a point. They got nothing to charge you with.”

A popular sentiment throughout mainland protests is to defund the police, though that’s not as absolute as it sounds.

In reality, the movement to defund the police is inspired by the notion that taking some of the money used to fill police ranks can be better utilized by employing and deploying mental health specialists to certain situations rather than law enforcement, as well as spending more money on public education, early intervention programs and drug treatment programs, which have proven to reduce crime by providing people with better options and more resources.

When effective, such programs can theoretically lead to a reduced need for police, which leads to fewer volatile interactions between law enforcement and the public that can ultimately result in tragic endings — like the one George Floyd met with 19 days ago in Minneapolis.

“I kind of agree with defunding the police,” Laryea said. “Research shows (some) police have less training than barbers. How am I going to get a haircut from someone who has more training than a police officer who’s supposed to be (protecting me)?”

“If they use the money to fund schools, libraries, they give people more of a chance,” he continued. “So much money goes into funding the police. Coronavirus hit, and we didn’t have enough PPP for medical services. In a pandemic, we don’t have the resources, but we have resources for this? It just doesn’t make sense. At this point, silence is betrayal. Me turning an eye, that’s not right. As humans, that’s not right. If you can help — help.”

“People are dying,” he said. “You don’t need military equipment in (residential areas). What do you need that for? We’re not living in some war-torn country … where we gotta be fighting every day. So what are we doing taking money and spending it on army equipment for the cops?”

After the march concluded, several dozen protestors met back at the rally point, which was located at the intersection of Queen Ka‘ahumanu Highway and Kaiwi Street. Several speakers took to the microphone, including Binti Bailey, who sang a portion of the gospel song, “We Shall Overcome.”

“This is such a beautiful showing out here,” she said to the crowd. “Know that being here, you’re doing enough if that’s all that you can give right now. What we want to do is utilize this momentum and put it into platforms that really make a difference — registering to vote, calling your Council people, aligning with organizations that are doing something to change what is happening.”

When the speeches concluded, protestors formed a line down the sidewalk, kneeling in silence for 8 minutes and 46 seconds — the same amount of time former Minneapolis police officer Derek Chauvin kneeled on the back of George Floyd’s neck, ending his life.

“We all matter. Yes, we know,” Bailey said. “Black lives matter right now. We are focusing on a movement that will help change this country.”