Stolen Fencing at Puna Park Found in Nearby Bushes 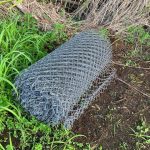 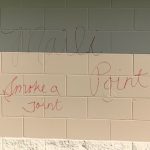 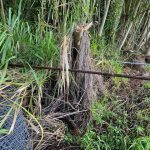 Fencing material found taken from a Puna park was discovered rolled up and tossed aside in nearby bushes, officials report this morning.

Caretakers of Hawaiian Beaches Park first discovered the 100 feet of fencing and top rail stolen from the baseball field on Nov. 4. The theft comes in the wake of numerous acts of vandalism that have plagued the park in recent weeks.

Graffiti was also recently discovered on the scoring booth at the ballfields a day after the booth had been repainted, according to a Facebook post from Mayor Harry Kim on Friday.

The post indicates that fencing materials will be installed as time permits.

If illegal activity at any of the county parks is observed, officials ask it be reported to the police non-emergency number at 808-935-3311.

If property damage or vandalism is found at any of the parks and beaches, inform Parks and Recreation as soon as possible at 808-961-8311.