Snake Run Over in Hilo in Good Condition 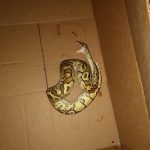 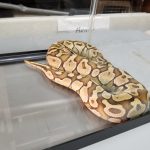 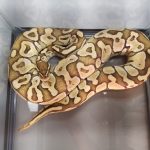 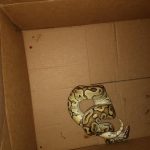 A 3-foot-long ball python run over by a Pāhoa woman in Hilo is reported to be in good condition, according to state officials Friday  afternoon.

On Oct. 17 at about 8:40 p.m. Susan Rosier, 71, was driving her son to work on Kanoelehua Avenue when she hit what she initially believed to be a branch by the old airport. It was her grandson who recognized it as a snake.

“So we backed up and it was curled up still alive,” Rosier stated. “He (grandson) put it in a box and I called police.”

Rosier said she’s never seen a snake in the 40 years she’s lived between the Big Island and Maui.

“Whether intentionally or not, to have a snake by the Airport Cargo is unacceptable,” she added.

Rosier said she hopes a thorough investigation takes place in regards to the snake.

“Not just at Hilo Airport, but all ports, the airports and the harbors,” she said. “We cannot continue to allow invasive species.”

Rosier said the state has got to step up and fix the problem.

“Look the coqui frogs, now on every island,” she said. “This has to stop.”

The state, Rosier said, needs to protect people not commerce.

The Department of Agriculture issued a press release Friday afternoon. It stated the snake is tan and brown in color, measures about 3 feet long and weighs about 2 pounds. The current condition of the snake appears to be good.

Snakes are illegal to transport and possess in Hawai‘i. It is not known how the snake may have gotten to the heavily forested area. HDOA agricultural inspectors are conducting a search of the area and will be deploying traps to help ensure that no other snakes are in the area.

In June 2018, a 4 ½ foot long ball python was found at the South Hilo Sanitary Landfill by county workers, the release states. The origin of that snake is still unknown.

“We do not encourage people to handle snakes that they may find because the species and condition of the snake may not be easily determined,” said Phyllis Shimabukuro-Geiser, chairperson of the Hawai‘i Board of Agriculture. “If possible, they should try to contain it and prevent its escape and contact the state’s toll-free pest hotline at 643-PEST (7378) or the police department.”

Ball pythons are common in the pet trade and are native to Sub-Saharan Africa. They are constrictors that subdue prey by coiling around it, causing death by suffocation. Their diet usually consists of small mammals and birds. Ball pythons may grow up to 6 feet long.

Snakes and large reptiles have no natural predators in Hawai‘i and pose a serious threat to Hawai‘i’s unique ecosystem as they compete with native animal populations for food and habitat. Many species also prey on birds and their eggs, increasing the threat to our endangered native birds. Large snakes may also be a threat to humans and small pets.