Vanna White: The Woman Behind The Dress

For more  than 32 years, Vanna White has dazzled audiences with her charm and grace as the co-host of the American television series Wheel of Fortune.

Appearing in more than 6,000 episodes, she’s an icon to the show’s aficionados.

And while she has received plenty of fan-mail, the 57-year-old entertainer’s time in the limelight hasn’t been without criticism.

In the past, she’s been roasted by feminists for her role on the show, and was most recently mocked by Miley Cyrus when asked about her scandalous attire at the Video Music Awards in 2013.

“I thought that’s what the VMAs were all about!” she told the Rolling Stone Magazine. “It’s not the Grammys or the Oscars. You’re not supposed to show up in a gown, Vanna White-style. It’s supposed to be fun!”

But one thing Cyrus and others may not know is that behind the dress is a hard-working woman, a proud mother, and a philanthropist.

White is a mother of two and currently owns her own line of yarn called “Vanna’s Choice,” from which a portion of the proceeds are donated to St. Jude Children’s Research Hospital. She also contributes to other philanthropic efforts, as well.

Last Wednesday, White reflected on her life and career during an interview with Big Island Now before a Wheel of Fortune taping at the Hilton Waikoloa.  (Tapings took place September 13, 14, 16 and 17, and the shows will air throughout the season. Each taping drew a crowd of 1,000 people and the show’s executive producer said they spent about $6 million to film in Hawai`i.)

White said her return to the Big Island made her feel somewhat nostalgic. Last time she was at the Hilton Waikoloa she was with her son who was 18-months-old at the time. He is now 20.

“It’s fun to come back because I remember walking down the corridor and I remember looking down and there were these little lizards and I’d be walking with him…” she said. “It brings back a lot of very good memories.”

Being a mother is a topic White discusses freely and with pride.

“I’m just like any other mother. Actually, I think I’m more of a mother because I grew up in the south, baking cookies and all of that. I’m just a mom.” she said. “I’ve been famous their whole life so they don’t think anything of it.”

The one time her children did recognize her stardom was when she appeared on an informercial in the middle of the day and when she guest-starred on the American sitcom Full House.

“It was totally out of sorts for them. Wheel of Fortune? Oh, well. They see that every day!” she joked.

White said she continued to work on Wheel of Fortune up until her pregnancies, and was able to travel with her children, as well.

That’s just all part of show business, she said, admitting that not even being sick can keep them from taping.

“We have been sick, but the show must go on. I was nauseous sick one time. I had a trash can behind the puzzle board,” she said.

She’s even worked with a broken arm.

“Nobody knows that. I broke my arm the night we won our first Emmy! And I tripped afterwards and broke my arm…” she said. “I did the show, but couldn’t use my right hand. Still, nobody knew!”

Aside from the occasional broken bone and nausea, White said she’s had mostly positive experiences on the show, especially working with the cast.

One of her favorite moments came unexpectedly a few years ago.

“One time, this girl won really big and literally picked Pat Sajak up!” she said with a laugh.

And in all of the 32 years of filming, White admits that in all of her travels, there’s just no place like Hawai`i.

“How do you even pick a favorite spot? The views, the sunsets, the rainbows…” she said.

For more information about future events at the resort visit www.hiltonwaikoloavillage.com. 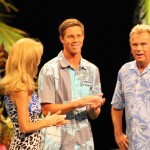 Wheel of Fortune hosts talk story with Kona resident Shawn Watson during a taping of the show Wednesday, Sept. 17. 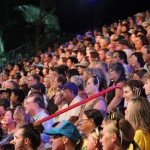 About 1,000 people attended the Wheel of Fortune taping at the Hilton Waikoloa Wednesday, Sept. 17. 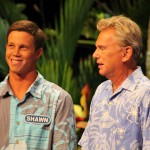 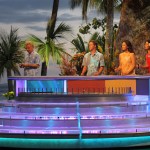 Contestants wait their turn during The Wheel of Fortune taping in Kona on Wednesday, Sept.17.