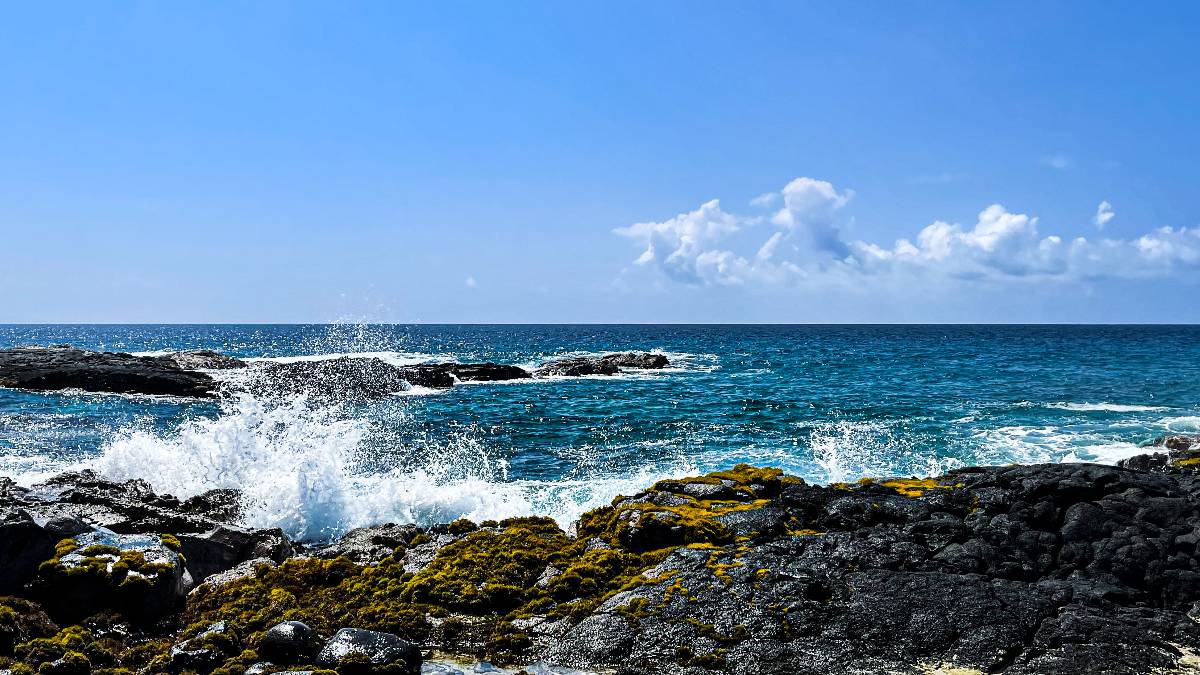 Breezy trades will decrease to moderate Wednesday and Thursday and will potentially become light by early next week. A typical trade wind pattern with showers focused over windward and mauka areas will prevail during this time.

Breezy trades will persist for one more day, carrying the next batch of moisture over Windward Big Island this morning into this afternoon and the smaller islands later this evening. Improving conditions are likely by mid-afternoon for the Big Island as moisture quality diminishes and what moisture remains mixes upslope, leaving the lower slopes mostly dry into the evening hours. As the closed upper low presently north of the islands drifts directly overhead during Wednesday and Thursday, the local pressure gradient will diminish causing trades to decrease into the moderate category. The occasional shortwave rotating around the parent low and the elevated inversion may allow for brief upticks in trade wind showers during this time. Also of note, veered mid-level flow will carry increased moisture toward the Big Island by Thursday. The deeper moisture and weakly divergent flow aloft will favor a greater coverage of afternoon clouds showers over upslope sections of the Big Island, including the summits, during the latter half of the week. T-storm potential over the BI slopes late this week appears marginal but will be worth monitoring. Marginal 700-500MB lapse rates of around 6.5C/km can be steepened by diurnal heating of the higher elevations, but that potential will be entirely conditional on the extent of cloud cover that develops earlier in the day.
For the latter half of the weekend into early next week, longwave ridge amplification centered near the Dateline is modeled to force surface high pressure southward over the central Pacific, the lead edge representing a shallow cold front that will potentially reach the 30N-25N range on Sunday night. Should this materialize, trades would become light and potentially give way to a land/sea breeze pattern to start next week.

Surface high pressure N of the islands will move ESE over the next 24 hours or so, with breezy to locally strong ENE gradually easing in response. AIRMET Tango for low level turbulence over and downwind of the terrain remains posted, but it may be dropped later today or tonight.
The trade winds will deliver stable and showery low clouds that will primarily focus over windward coasts and slopes, producing isolated to tempo MVFR VIS/CIG in SHRA. Coverage may increase at times to warrant AIRMET Sierra for mountain obscuration as a cluster of showers approaching from the E moves through, initially affecting windward Maui and Big Island. VFR conditions will prevail over most leeward areas, with the exception of some afternoon and evening clouds and showers on the leeward slopes of the Big Island producing isolated MVFR conditions.

High pressure far north of the state will begin to weaken today and gradually shift eastward. This will cause the pressure gradient to relax over the state, resulting in the trade winds gradually easing through Wednesday. Winds are expected to drop below the Small Craft Advisory threshold in the typically windy zones around Maui County and the Big Island by this evening. A new high will build north of the state, bringing the return of moderate to breezy trade winds towards the end of the week. However, trades will likely weaken over the weekend as a front passes north of the state.
A small reinforcing north-northwest swell is expected to fill in through today, followed by a small short-period north swell towards the middle of the week. Another small north-northwest swell is possible towards the end of the week. Surf along south facing shores will gradually decline over the next few days, with only background swells expected throughout this week. A small Tasman swell from the southwest is possible Thursday into Friday. Surf along east facing shores will remain relatively small due to the lack of strong trade winds.