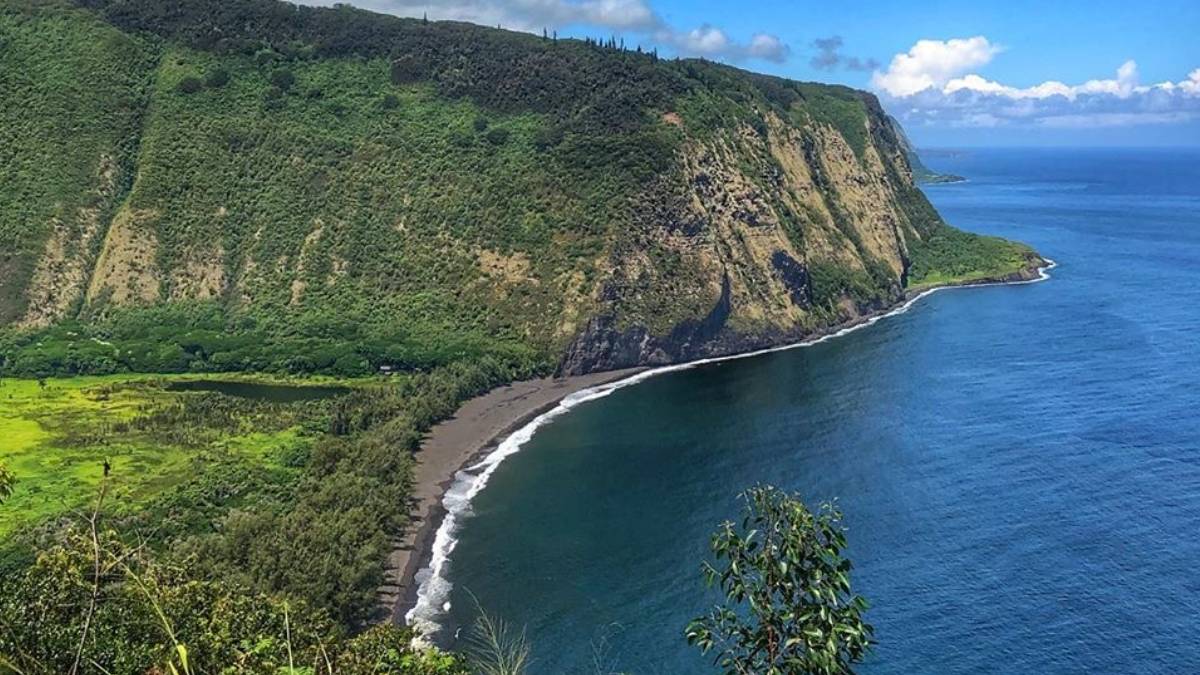 Breezy to locally windy trades will continue to carry clouds and showers into windward and mountains areas today, with some stronger showers will reach the interior and leeward sections of each island. Additional moisture moving into the state from the north will help to enhance showers into Friday. Strong and gusty trade winds will continue into the weekend with periods of passing showers developing across the region. Light and variable winds develop from late Monday onward in an unsettled weather regime.

A high pressure system passing eastward far to the north of the Hawaiian Islands will keep breezy to locally windy trade winds in the forecast through the weekend. Satellite imagery this morning shows an upper level short wave trough moving into the state from the northwest as the remnant cloud band from an old front moves into the islands from the north. Both features will combine forecast to enhance shower activity across all islands into Saturday. Strong trade winds will push these unstable clouds up the north and east slopes of each island, with shower coverage and rainfall amounts favoring windward and mountain areas. A subtropical jet lingers over the southern half of the Big Island producing scattered high cirrus clouds mainly over the Ka’u and Puna districts.
Unsettled blustery trade winds will continue this weekend as the upper trough stalls over the islands possibly forming a closed upper low. This upper low will add instability to passing trade showers with the possibility for isolated thunderstorms near the islands. Strong trade winds will peak on Saturday with a slight decreasing trend forecast to begin late Sunday.
Trade wind speeds will trend lower from Sunday night into Monday as the high pressure system drifts into the East Pacific further away from the main Hawaiian Islands. A low pressure system approaching the islands from the northwest appears to stall north of the region. This low pressure systems will likely produce an extended period of light and variable winds across the area from Tuesday onward. Local scale land and sea breezes will develop over each island in the absence of large scale winds. Long range model solutions show a surface trough moving into the western islands on Wednesday and Thursday with increasing shower trends along the trough axis. Slow moving unstable shower activity and possible thunderstorms may increase the threat for Flash Flooding during this time period. However, this long range forecast guidance may struggle a bit with the intensity and timing of this next weather system. Stay tuned for updates to our long range forecast as these weather impacts will likely evolve over time.

Breezy trade winds will continue to carry clouds and showers towards windward slopes and coasts. An upper level trough slowly passing over the area will enhance shower activity. Brief MVFR conditions are expected in showers for both windward and leeward coasts. Mountain obscuration will remain a possibility for all islands both day and night.
Light sea breezes will redevelop along the leeward Big Island coast this afternoon. This will prompt the redevelopment of cumulus buildups over the island’s interior. Both the sea breezes and the inland showers will linger through early evening.
AIRMET Sierra is now in effect for mountain obscurations north facing slopes of Kauai. These conditions may spread to the remainder of the smaller islands later today.
AIRMET Tango remains in effect for both low level and upper level turbulence. Low level mechanical turbulence over and downstream of higher terrain from Kauai to Maui is expected to persist through twenty-four hours and possibly beyond. Upper level turbulence associated with a jet aloft is currently impacting Big Island and adjacent waters above FL270 but is expected to end by morning.

A strong high north of the area is producing fresh to strong trade winds. A Small Craft Advisory (SCA) is in effect for all coastal waters due to winds of 25 knots or stronger, seas 10 feet or higher or both. The SCA runs through Saturday evening, but there may be periods when some areas drop below SCA thresholds. Winds will reach near-gale force in the windier areas starting Friday night as a new high builds northeast of the area. Winds will subside next week as a front approaches from the northwest.
A High Surf Advisory (HSA) is in effect for east facing shores through Saturday afternoon due to a north swell and strong trade winds. A small northwest swell is expected Monday night. A large northwest swell is possible next Wednesday. Surf will remain small along south facing shores through early next week. Swells from gales near New Zealand may produce a modest rise in surf along the south facing shores starting around the middle of next week.