“Creativity takes courage,” Eugene Menor said, quoting Henri Matisse. A tattoo artist for 13 years, Menor describes himself as an artist of life. Whether it’s through writing lyrics, designing tattoos or creating a larger-than-life mural, Menor says he values expression and creativity as a universal language.

In late December, Eugene Menor decorated Brewery Block with a new mural celebrating expression, life and graffiti-style art. Since moving to Hawai‘i five years ago, the artist has painted around the island and has murals in Kailua-Kona, Waimea, Kainaliu, and Puna. Menor was approached about the Brewery Block mural during Ride the Breaks, an annual Hip Hop cultural festival and breakdancing competition. Menor said he and other artists were given free range to express their artistic vision.

Menor’s mural, done exclusively with spray paint, can be found in back of HiCO and Willie’s Hot Chicken.

“Usually someone comes with an idea and I work with that idea and execute it. This one was pure soul, what’s inside of me, what am I dealing with, what I want to express and share and tell a story with,” he said. 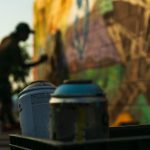 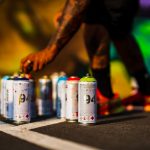 Menor shared his inspiration, saying that the grind of life and our attachment to devices can make us feel like robots. We feel programmed to our schedules, our phones, our 9-to-5’s. The man in the mural represents this duality of flesh and machine.

The colorful mural features a man on his back with his phone in one hand and parts of his body stripped away to reveal pieces of machinery. Menor’s optimism can be seen in a Ha¯pu‘u fern blooming from the bionic man’s chest. This imagery is especially meaningful to Menor, representing new beginnings, growth and a return to humanity through nature,

“This is a new beginning for all of us. I want life to come out.” Menor said.

The Brewery Block murals are representative of an attitude change regarding graffiti both artistically and culturally. Far from the antiquated idea of “tagging” as a purely illegal activity, graffiti has resurged as a respected art form.

Menor owns and operates tattoo studio Union Pasifika out of Waimea, although his next projects will take him to Honolulu where he is planning two new murals. More information on his art, shop, and personal story can be found at http://www.eukarezt.com/blog/2015/9/18/union-pasifika.