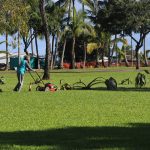 A man mows a section of recently planted flora at Wailoa State Park. The DLNR said the planting and mowing are against the law. PC: DLNR 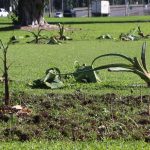 Hawaiian sovereignty activists on the weekend began “occupying” a portion of Wailoa State Park, engaging in what the DLNR described as “illegal” activities including planting over the weekend. PC: DLNR 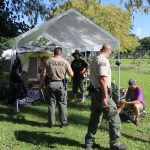 Enforcement officers engage with Hawaiian sovereignty activists Tuesday, Jan. 5, 2021. The activists are “occupying” a portion of Wailoa State Park, engaging in what the DLNR said is illegal activity. PC: DLNR

A showdown is brewing between a group of Hawaiian sovereignty activists and the state of Hawai‘i at the Wailoa River State Recreation Area.

The group, led by Gene Tamashiro and comprised of upwards of 75 individuals, began “occupying” a portion of the park Sunday.

On Tuesday, the Hawai‘i Department of Land and Natural Resources (DLNR) described the group’s actions as “illegal” and issued them a cease and desist order with a deadline of 5 p.m. on Wednesday, Jan. 6.

Any failure to comply with the order will result in the removal of tents and other camping gear by state officials, as it will be deemed “abandoned property,” the state said in a release.

Officers from the DLNR Division of Conservation and Resources Enforcement (DOCARE) taped one order on a sign the group had put up at the park’s entrance, according to a state press release. Another was presented to Tamashiro, and a third was posted in a small encampment that had been set up on the grounds.

Video courtesy of the state Department of Land and Natural Resources

According to the DLNR, the group has planted between 50 and 60 taro plants and banana trees across a football field-sized area of the park. The participants are claiming jurisdiction over the park via authority of the Hawaiian Kingdom.

“If it’s in the creator’s will, we’re going to create a village,” Tamashiro told the Hawai‘i Tribune Herald, which first reported the story on Monday. “And we’re going to aloha and cooperate with all parties in peace and harmony and in clarification and confirmation of the law. That’s what we’re here for. It’s an inalienable right to require and to give full disclosure and substantive due process. And that’s all I want.”

The DLNR disputed the group’s claim to jurisdiction, countering in its release that the group does not have any permits for planting or for erecting signs at Wailoa.

Eight years back, Tamashiro was cited for conducting similar activities at the park. HTH reported that the vast majority of the group, including its leader, were not wearing face coverings as they carried out their “occupation” in recent days, which is not in accordance with state and county COVID-19 protocol.

“No matter their professed claims of ownership, this recreation area and all other state parks belong to all of Hawai‘i for the enjoyment by residents and visitors,” said DOCARE Chief Jason Redulla. “Park users have expressed concerns that members of this group are ignoring county and state mandates to wear masks during the COVID-19 pandemic.”