Captives under the invisible tyranny of the coronavirus pandemic, Big Islanders have watched helplessly as all sense of security dissipates — from job security and the reasonable expectation of health to the source of their next meal.

An ‘ohana food service at Old Airport Park in Kailua-Kona highlighted starkly the latter on Thursday, as upwards of 100,000 pounds of local starches, proteins, and produce were distributed to what Food Basket Executive Director Kristin Frost-Albrecht guessed was around 1,000 families.

“We expected a whole lot, but not this much,” said Marshall Akamu, West Hawai‘i Operations Manager for the Food Basket. “It’s more than last month.”

Police directed traffic for lines of vehicles that crept slowly through the queue, hoping to reach the distribution center before the food ran out. Officers said at its peak, the line spilled out onto the portion of Kuakini Highway fronting the park, and that the first vehicles showed up hours before distribution even began.

With Thanksgiving just one week away, turkeys were a featured item, along with rice, canned goods, produce, and juices. Akamu said the pending holiday season probably contributed to an uptick in community participation, but the pandemic itself remains the driving factor.

“Right now a lot of people are still out of a job and they need help,” he continued. “I expect more next month because of Christmas time.”

While the scene in Kailua-Kona Thursday was emblematic of the desperation Big Island families continue to feel due to an unrelenting and unforgiving coronavirus, it was also symbolic of the caring, community spirit that will eventually drive Hawai‘i through this once-in-a-century public health crisis. 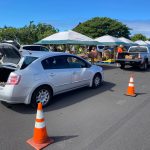 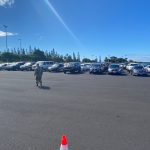 A Hawaii National Guardsman looks out over a vast queue of vehicles waiting to pick up donations from the Food Basket on Thursday, Nov. 19, 2020. PC: Max Dible 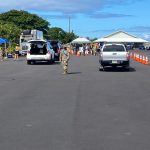 This was the view some waited hours to see, as they were called one by one to move through a socially distanced ohana food service pickup line at Old Kona Airport Park on Thursday, Nov. 19, 2020. PC: Max Dible

Workers from the Food Basket joined volunteers from the Lions Club, Youth With a Mission, and Hawaiian Airlines, among others, who helped manage the morning’s staggering logistical tasks. The Hawai‘i National Guard was also present to direct traffic and assist with distribution.

Frost-Albrecht said while there has been some monetary contribution from the state and a little from Hawai‘i County, the 100,000 pounds of food distributed Thursday came mostly by way of the generosity of the Food Basket’s some 6,000 unique donors.

“We are really community-driven,” she said. “Most of this is from foundations and donors.”

Everything purchased and distributed was locally-sourced through Big Island farmers, ranchers, fishers, or distributors like Suisan and KTA Super Stores, she continued.

The Food Basket also focuses on making the pick-up process as simple and inclusive as possible at all their food service events. Anyone is welcome. No names are recorded, only zip codes to make sure participants qualify. As such, community members came by car, by bike, and by foot to get a boost for the holiday season.

“People just need to come down and show up,” Frost-Albrecht said.

The Food Basket will be at the Community Center in Pāhoa Friday, Nov. 20, ready to do it all over again.