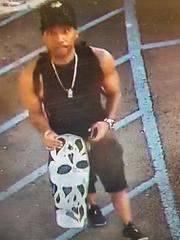 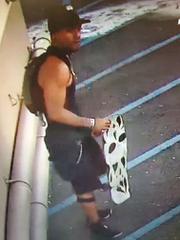 Police are seeking the public’s help in identifying a male who broke into a vehicle and stole a purse in the downtown Hilo area.

The investigation into an unauthorized entry to a motor vehicle began on May 8. According to the Hawai‘i Police Department, an unknown male entered the vehicle parked at a gas station on the 400 block of Kamehameha Avenue and removed the purse with contents.

The male suspect is described as having a dark complexion and a thin build. He was last seen wearing a dark-colored baseball cap, a black sleeveless shirt, black shorts, and an unknown colored backpack. He was observed leaving the area on a black and white skateboard.

Police ask anyone with any information about this case or the identity of the person depicted, to call the Hawaiʻi Police Department’s non-emergency number at 935-3311 or Officer’s Blaine Kenolio or Christopher Fukumoto at 808-961-2213.

Tipsters who prefer to remain anonymous may call the island-wide Crime Stoppers number at 961-8300 and may be eligible for a reward of up to $1,000.