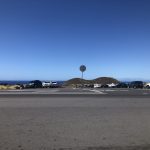 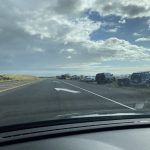 All state parks in Hawai‘i are closed due to the COVID-19 pandemic circling the globe, but that’s not stopping Big Island residents and visitors from visiting the beach.

The Department of Land and Natural Resources announced the closures Friday, but hundreds of Big Islanders decided to have beach weekends regardless. They made these decisions despite the fact that merely traveling to a state park under current restrictions is a petty misdemeanor punishable by a fine of up to $500, 30 days imprisonment, or both.

“Due to the current state of emergency, there are enhanced penalties that can be levied,” said DLNR Division of Conservation and Resources Enforcement Chief Jason Redulla.

One popular spot over the weekend was Kua Bay, part of Kekaha Kai Beach Park. Although the gates to the beach are closed, dozens of cars lined the side of Queen Ka‘ahumanu Highway Sunday as people parked and hiked their way down to the oceanside.

Parkgoers ranged from indifferent to indignant about the idea that the state and county are attempting to close off the oceanfront to the public in an effort to help curb the spread of COVID-19.

“The government doesn’t have the right to keep people off public lands, there’s no aloha in it,” said a West Hawai‘i resident who asked to be identified only as Lacey when told her presence at the park was a misdemeanor. “We’re outside, not indoors, and we’re staying clear of people as best we can. You get more exposure to the virus walking around a grocery store.”

Others in the community, however, are disillusioned by what they say are selfish and/or ignorant actions by their friends and neighbors.

“Let’s just make it a law and make sure it’s enforced,” said Robert Love, a chef at the Four Seasons Hualalai who’s been living on the Big Island for 20 years. “Kua Bay is still busy and neither police nor DLNR seem to know what to do. There will be a huge rise in cases once people are really tested widespread.”

DOCARE officers are primarily responsible for enforcement of initiatives like beach closures, but there are only about 100 such officers statewide, the DLNR wrote in an email.

“We are aware of popular locations where people continue to ignore closures and ask that people be considerate of others and realize these closures are in place to protect their health and the health of others,” the DLNR said. “In addition to patrolling closed State Parks and other shuttered DLNR lands and facilities, DOCARE officers continue to enforce a wide variety of resource protection laws and rules.”

Police generally do not get involved in state enforcement matters, though they can be enlisted or take initiative on their own.

“We will engage the county police departments if we require their assistance,” Redulla said. “Additionally, the Hawai‘i County Police Department can enforce the state parks rules should they encounter violations.”