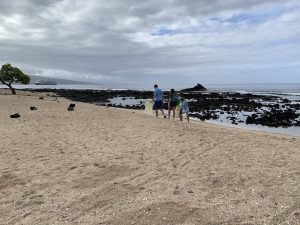 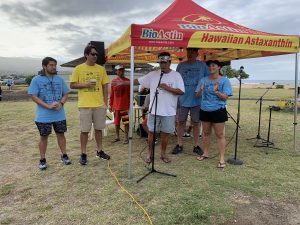 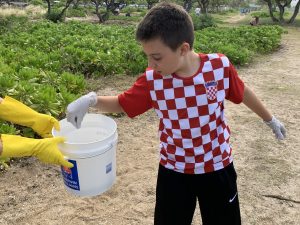 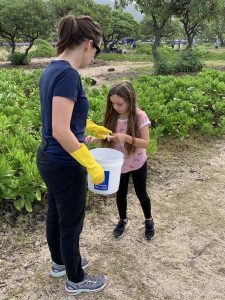 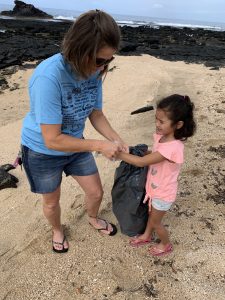 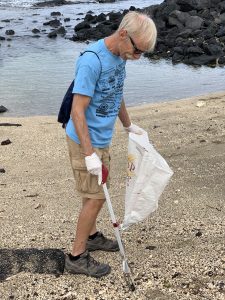 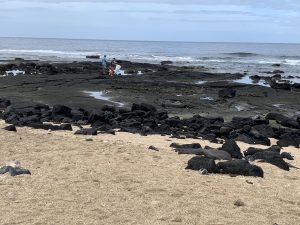 Hundreds of people flocked to West Hawai‘i’s beaches on Saturday to pick up trash.

At Old Kona Airport Park men, women and children walked the shoreline collecting wrappers, cigarette butts, bottle caps and whatever else came across their paths. For more than two decades, members of the Big Island Wave Riders Against Drugs organized this event to keep the leeward coastline pristine.

“We live in the most beautiful place in the world,” said BIWRAD president Jeffry Fear Saturday morning. “We have a kuleana to take care of it.”

BIWRAD had cleanups spread across the coast, from Miloli‘i, to Keauhou to Hapuna. Fear started the cleanup as part of a surf contest 27 years ago. However, he wanted to get more people and children involved so he began inviting the community. While the surf contest no longer exists, the cleanup has continued and grown over the years.

Jenna Lee, member of BIWRAD and Fear’s daughter, grew up in Kona. She is now a teacher. She brought her children to Saturday’s event.

“It’s really important to be stewards of the land and to keep the beaches pristine for the next generation,” Lee said.

This service, she added, provides an education to the children that hopefully they will continue as they get older.

“Hopefully, one day, it will be island wide,” Lee said.

Community members were more than happy to be spending their Saturday scouring for rubbish. Eric Johnson, a part-time Kona resident, said he’s been participating in the cleanup for the past eight years.

Johnson started coming to the cleanups as a way to give back to the island — he also enjoys doing it.

“The more people who get involved, the cleaner our beaches will be,” he said. “People will be less inclined to litter if they got involved in the cleanup.”

Several parents were out with their children. Elizabeth Stevens, a lieutenant for the US Coast Guard stationed in Kona, was following her 8- and 10-year-old around with a bucket as they looked or trash.

Stevens said events such as this are immensely important, as they want to keep people coming back to the beaches and feeling comfortable and safe.

“It’s a good family bonding opportunity to teach them (kids) to do something good,” she added.

Stevens was recently transferred to the Big Island with her family last year. She is scheduled to be stationed here for three years.

“Everywhere we’ve moved we try to get involved with the community,” she said. “It’s good to connect with the culture.”

The beach cleanup was their first opportunity to do service. Stevens’ children, Zoey and Zane, also were eager to be out gathering trash.

“It’s so we protect wildlife, the ocean and coral,” 10-year-old Zane said.

Not far from the Stevens family was Kelly Newcomb and her 5-year-old daughter, Nue.

Newcomb grew up in Kona. Saturday was her first time coming out to the beaches for a cleanup. She came out because she wanted to help keep her community clean.

“You got appreciate where you live,” she said.

Newcomb said it was important for her to bring her daughter out so she could not only get involved, but appreciate her heritage.