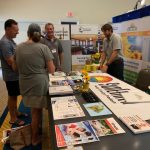 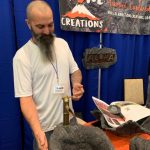 Mike Stone showed off his lava-like sink and other home creations at the Living & Design Expo at the Sheraton Keauhou on Saturday and Sunday. The show was produced by the Kona-Kohala Chamber of Commerce. PC: Leslie Harlib 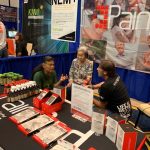 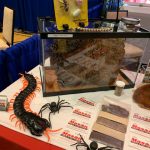 Creepy-crawlies drew the eye (and the shudders) at the Mason Pest Control Booth. PC: Leslie Harlib

More than 2,000 visitors turned out on Saturday and Sunday for the free-to-the-public, 15th annual Living & Design Show sponsored by the Kona-Kohala Chamber of Commerce. They packed the convention area at the Sheraton Kona Resort & Spa at Keauhou Bay.

“This show has grown a lot,” said Wendy Laros, executive director of the Kona-Kohala Chamber of Commerce. “We’ve completely sold out on the convention room floor this year and had to spill into a side room — it’s the most vendors we’ve ever had.”

It was a festival of more than 40 useful booths, including longtime sponsors and supporters like Honsador Lumber Corporation, Dickinson General Contracting, Kona Solar and Hawai‘i Gas.

Everyone, from contractors to builders and bankers to artists, showcased various products you could see and touch. There was air conditioning, pool supplies, power/energy providers, pest control, even pain control. No matter what each business was touting, they lured passersby with fun freebies that were scooped up with the enthusiasm of kids trolling for sweets on Halloween.

Customers were harvesting candies, coffee mugs, fridge magnets, pens and cloth sacks galore. Some booths, such as Royal Pools of Hawai‘i, offered games. Potential customers at these kiosks could win the occasional tee shirt, hand fan or logo-emblazoned drinking glass. There was also plenty of gathering of business cards, brochures and general information.

“We get to meet a lot of great people looking for home improvements, so we’ve been involved with this exhibit for years,” said Rhonda Kavanagh, co-owner of Kona Solar, which presented one of the show’s largest displays. “This is a great opportunity to connect with people and share info on going solar. It’s good for our pocketbook and good for the environment.”

“I think it’s wonderful,” said Bonnie Harris, a new Kona resident attending for the first time. “And Dickinson’s built our home for us. We moved here two years ago. This show gives us new ideas, even for our new home. Plus the kindness of people here is unbelievable. I love the personal feeling you get at a trade show like this.”

In the midst of this buffet of home improvement products was Pain Pod, debuting at the expo this year. The brainchild of two-year Kona resident Tom Ivascanin, of Gold Coast, Australia, Pain Pod was about body — rather than home — improvement.

Ivascanin is the founder and creator of a line of FDA-approved machines and supplements. His electrical machines, about eight inches long, strap to the body and provide electrical currents that feel mildly stimulating and buzzy. Worn for half an hour at a time and suggested to be used twice a day, they’re designed to manage pain without drugs.

Ivascanin said he came to the show because he loves Kona and wants to get the word out about his unusual product that was listed as a “Gadget of the Year” in Forbes, for 2019.

Another newcomer was Lava Island Stone Creations, owned by Mike Stone and business partner Inge Juchtzer. They craft black, lava-like picture frames, bathroom sinks, entry walks — anything you can think of that you might like to have look like pahoehoe or even a‘a, rather than more traditional stone or poured concrete.

“We like the fact that you can take our lava creations off the island and not anger Pele,” said Stone.

Arguably, the creepiest booth was Mason Pest Control, which welcomed you with a gigantic black plastic centipede, a glass case holding a termite nest and a variety of other pictures and facsimiles of the BigIsland’s most notorious insects.

“We’ve been doing great business from year one, and we can barely keep up with the demand because it’s hard to find the qualified personnel to do the work,” said owner Tommy Mason, a regular presenter at the Living & Design show for 10 years. “There’s a real need for pest control on the Big Island.”

Mason said he loves doing the show anyway, though he doesn’t need the extra business.

“We do it because we believe in giving back to the Kona Kohala Chamber,” he said. “They were there for us when we began, and now we are here for them.”

“We joined it because we felt it was important,” Braddock said. “We saw this show as a unique opportunity to showcase our services and meet people from all over Hawai‘i. This whole thing resonates Aloha.”

In addition to the yearly Living and Design show, the Kona-Kohala Chamber of Commerce produces two luncheons/business expos a year. Any chamber member can participate in these. The luncheons are also open to members and non-members. Business expos offer members the opportunity to take a tabletop booth. They typically feature 20 to 30 exhibitors in every type of business.

On Friday, March 20, there will be a focus luncheon with Hawai‘i County Leaders in a panel discussion tackling such topics as homelessness, permitting reform and astronomy on Mauna Kea. It will take place at the Courtyard by Marriott King Kamehameha’s Kona Beach Hotel, beginning at noon. Tickets are $70 for the general public and $60 for chamber members. The event includes the luncheon, panel discussion and the opportunity to network. For more information/tickets, go to www.kona-kohala.com.