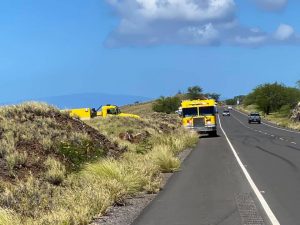 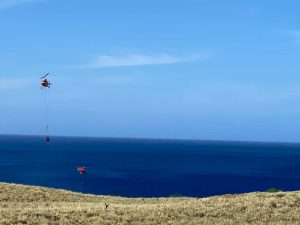 Sadie Davey Young captures images of helicopters bringing water from the ocean to put out a coastline fire.

Approximately 10 acres of coastline was scorched near Kawaihae, Thursday morning.

Hawai‘i Fire Department responded to a report of a brush fire at 10:53 a.m. by mile marker 8 on Akoni Pule Highway. When they arrived on scene they observed campers in the area, said Battalion Chief William Bergin.

Sadie Davey Young was in the area when fire crews responded and captured images of fire trucks and helicopters bringing water from the ocean.

The flames were contained quickly and there were no reported injuries. Bergin said the fire is suspected to be started by campers.