New details have emerged surrounding the disappearance of 24-year-old Megan May Funderburk from the Wainaku Scenic Point area, located just north of Hilo.

David Funderburk, Megan’s father, said she was with her boyfriend, Michael Broan, at the location the evening of Sunday, Feb. 9. An argument ensued when Megan allegedly found out Broan intended to purchase drugs from an unknown third party set to meet the couple there. It was at that point Megan exited the vehicle, and Broan departed. All this information was provided to Megan’s father by Broan himself, David said.

Broan — who police said is cooperating with the investigation but who also left the island Monday, bound for a rehabilitation center in California — claims to have left Megan at the scenic point. It is unclear who the third party was he’d planned to meet, if that person or persons ever arrived, or if that person or persons came upon/interacted with Megan after Broan left.

A civilian passerby later found Megan’s phone in the same general vicinity where she allegedly exited her boyfriend’s car. Search teams on Monday found one of her shoes and a shawl she’d been wearing, also near the spot she was last seen.

“It kind of points to that she got picked up in that area,” David said. “I’m not ruling anything out at this point.”

Lt. Rio Amon-Wilkins, with the Criminal Investigations Unit of the Hawai‘i Police Department, said Megan’s disappearance remains a missing person case and has not been classified as a kidnapping.

“The only indication is that the point of last contact is not an area where you would get lost,” said Berquist, adding the terrain is rugged but the area is small. “I can’t speak to any evidence or police hypotheses, but from hard data … this is not a lost hiker. This is a misplaced person.” 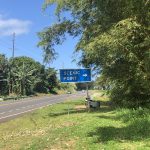 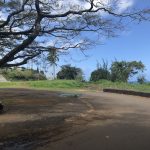 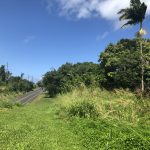 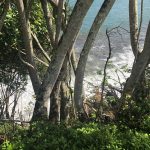 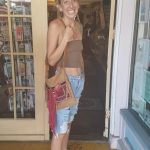 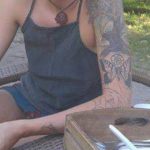 Megan May Funderburk has a prominent tattoo on her left arm. Courtesy of David Funderburk

Police and fire personnel conducted a thorough search of the area, which included dogs, a rescue boat and a rescue chopper but produced no leads.

Berquist spent Friday organizing volunteers, distributing flyers and making media contacts in preparation for what will be an exhaustive search effort in the days to come.

“Part of our goal today is to get (Megan’s) timeline hammered out,” he said.

David said a dispute over drug use between Megan and Broan earlier in the week had left her stressed out. A police officer she’d contacted for help when she decided to leave the house in which she and Broan were residing told David that Megan didn’t appear as though she’d been eating or sleeping well.

“Megan may be mentally shaken up, and she was losing sleep over this information,” David said. “I could tell talking to her she wasn’t all there, so she definitely might be out of it or disoriented or just not there. There’s a possibility that if she was abducted, that hopefully she escaped and she might be hiding out in the woods in total fear.”

He added that Megan has never shown signs of any mental illness and that he did not believe his daughter was caught up in the drug scene.

Megan, who often goes by May or Mei, arrived on the Big Island five years ago from southern Oregon.

“She’s very adventurous, and she fell in love with the land and people,” David said. “She started making a life here in the farming community. She had dreams of getting property and running an organic farm here.”

Megan is described as being 5 feet, 9 inches tall, 117 pounds with hazel eyes and blond hair. She has a tattoo of the Star of David on her chest and was last seen wearing a gray long-sleeved cut-off top and unknown color pants

Hawai‘i County Police ask anyone with information on her whereabouts to call the department’s non-emergency line at 808-935-3311.

A Facebook page has been created in the effort to locate Megan.