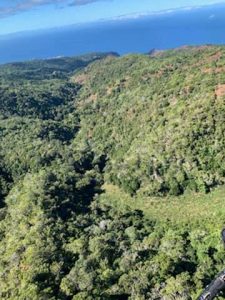 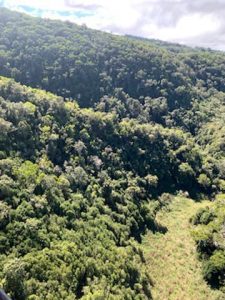 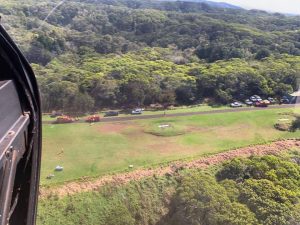 All passengers aboard a helicopter that crashed a couple days ago in Kaua‘i are now confirmed to be dead by Kaua‘i Police Department Saturday afternoon.

The Kaua‘i Police Department, Kaua‘i Fire Department and the Department of Land and Natural Resources continued recovery efforts Saturday of the helicopter crash that occurred in Kōke‘e. Due to the additional recovery efforts, the nature of the crash and impact damage, Kaua‘i police can confirm that there are no survivors.

According to preliminary reports from a flight manifest, Kaua‘i police believe the pilot to be 69-year-old Paul Matero of Wailua and two of the passengers to be 47-year-old Amy Gannon and 13-year-old Jocelyn Gannon of Madison, Wisconsin. The four other passengers are believed to be a family from Switzerland—a 50-year-old female, 49-year-old male, 13-year-old female and a 10-year old female. Their names have not yet been released.

Autopsies to positively confirm all identities are still pending.

“We offer our continued condolences and prayers to the families and friends of the victims,” said KPD Assistant Chief Bryson Ponce. “As we continue to search for and recover evidence pertinent to this tragic helicopter crash, we hope to bring some sense of closure to the loved ones of the victims.”

Recovery efforts were suspended Saturday afternoon. The scene has been turned over for further investigation to the National Transportation Safety Board.