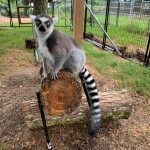 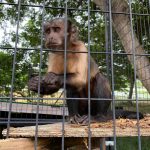 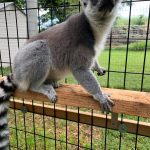 The nonprofit — home to around 100 animals, the likes of which include a zebra, flamingo and buffalo, among several others — welcomed two lemurs, two spider monkeys and two Capuchin monkeys to their new digs in Kailua-Kona last week.

The new arrivals all came from another sanctuary in California, which in anticipation of closing down needed to find homes for more than 500 exotic animals.

Anne Goody, who has owned and operated the sanctuary with her husband for more than two decades, said all six animals are likely here to stay.

“We’re always the last stop,” she said. “If an animal comes here, it’s here for life. We do fostering though, too. (Sometimes) we get an animal who would make a perfect pet. If it has behavioral issues or health needs, we work with it until it’s ready for a forever home.”

Mostly, Goody is referring to animals like chinchillas, guinea pigs or goats when talking adoption. Many of the animals at her sanctuary were made for the wild. Humans attempting to domesticate them, and the damage people can inflict upon animals when that happens, is one of the primary reasons sanctuaries like hers fill up in the first place.

“People sometimes tend to try and get their own emotional or psychological needs met through owning an animal and behaving in a way toward that animal that it cannot understand or accept,” Goody explained.

This was the case with the two young Capuchin monkeys, Beans and Juan Pablo, who recently arrived at the Three Ring Ranch.

A woman who had lost a child brought the two monkeys into her home in an effort to fill an empty space, Goody explained. But the consequences for the animals were troubling.

“She tried to rear them as a human infant. That included breastfeeding,” Goody said. “That left these monkeys psychologically damaged. While she was getting her needs met, they weren’t.”

Simple behaviors like laying the monkeys down after feeding them, which is normal behavior for a human child, felt like abandonment to the animals, Goody explained. Ever since arriving at the sanctuary, the monkeys have displayed what Goody described as “psychotic behavior,” covering their heads and rocking back and forth incessantly.

However, there has been improvement after only around a week in their new home, and Goody is hopeful it will continue.

“I don’t know how much (their behavioral issues) increased because of traveling, but we’re already seeing a lessening of that behavior,” said Goody, adding that the caretakers at the former sanctuary took care to make significant strides with the animals before their arrival in Kona.

Goody herself is no stranger to overcoming difficult circumstances that test mental and psychological limits. Just a day after her wedding more than 20 years ago, she was struck in the head by lightning. The jolt of electricity robbed her of her abilities to walk or speak, both of which she had to re-learn slowly and at great pain.

She described the frustration as immense, often being asked a question, thinking of a response and uttering a string of words completely unrelated to the question or the answer she’d conjured in her mind. But it was through one of these mishaps that the Three Ring Ranch came to be.

Studying for her dissertation at the time of the lightning strike added a layer of difficulty to the road back. Goody’s husband, Norm, saw his wife struggling and asked what he could do to offer some relief.

What she meant to say was “Let’s go to Paris.” What she actually said was one word that changed both of their lives forever: “Zebra.”

Norm procured for his wife what she’d inadvertently asked for and with that, the sanctuary was born.

The case of the Capuchins and their trauma is rare. Aside from the first zebra, most animals simply come from other facilities or private ownership to live out their lives at the sanctuary in Hawai‘i. Often, elderly animals find their way to the Three Ring Ranch, which is what happened with the spider monkeys, Donny and Frederica.

They and the lemurs, Mozambique and Madagascar, or Mo and Mady for short, fit in immediately and were part of their first sanctuary tour on Monday.

“They did great. They thrived with it,” Goody said. “They interacted — from a distance, behind fences.”

The Three Ring Ranch, located at 75-809 Keaolani Drive, offers a variety of experiences to the public, which can be accessed via its website at https://www.threeringranch.org/.

The organization is the state’s only fully-accredited, USDA-licensed exotic animal sanctuary and holds a wildlife permit for the possession of endangered species.