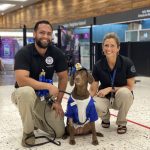 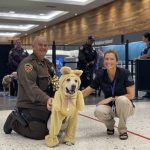 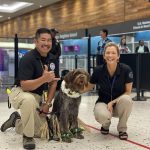 Some of TSA’s explosive detection canines at Daniel K. Inouye International Airport got a break from their day jobs to celebrate Halloween with a costume contest.

TSA canine Hershey was the big winner for his portrayal of a TSA officer. HSS canine Lynch, who works with the State Sheriffs, busted out the onesie teddy bear costume for second place.

Brute, a TSA canine and German Longhair Pointer, won third prize for her costume as a hula dancer.