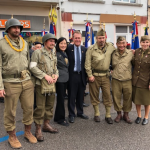 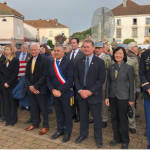 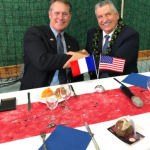 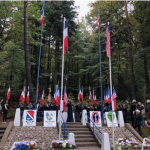 Buddhist ceremony to honor the AJA soldiers of the 442nd/100th at Helledraye Monument above Bruyeres. (PC: Office of Congressman Ed Case)

U.S. Congressman Ed Case (Hawai‘i – District 1) represented the United States Congress at ceremonies in and around Bruyères, France to honor soldiers of the U.S. Army’s 442nd Regimental Combat Team (RCT) on the 75th anniversary of some of their most notable achievements.

“In many ways they were just like any other American GI. But they were different, for they were mostly Japanese, mostly Nisei, second generation Americans, their parents born in Japan and immigrants to America in search of a better life,” Case said of the 442nd in his Bruyères remarks to dignitaries and guests.

In October 1944 the 442nd RCT, by then incorporating the equally storied 100th Infantry Battalion, were part of the U.S. Seventh Army’s offensive to liberate eastern France and pursue the German Army across the Rhine River into Germany. In fierce fighting in the Vosges Mountains of France, the 442nd liberated the towns of Bruyères, Biffontaine and Belmont and then, in the famous “Rescue of the Lost Battalion,” fought through German forces to save close to 300 Texas comrades who had been surrounded.

The 442nd went on to become the most decorated unit in American history, earning its members and other Nisei WWII veterans the Congressional Gold Medal in 2010.

“They were loyal Americans,” Case said. “But after Pearl Harbor their own country had questioned their loyalty.”

Case went on to say how the men were refused entry into the military, their property was seized, interned them and their families and friends in camps.

“It was one of the worst travesties by Americans against Americans in our history,” the congressman said. “Yet despite all that they suffered they wanted nothing more than to fight. To defend our country and our values. To prove their loyalty once and for all.”

Case was accompanied by his wife, Audrey, who commemorated the service in the 100th/442nd of two of her uncles. Private First-Class Yoshio (Michael) Hirata, from Kona and Audrey’s mother’s brother, fought in the Naples-Foggia and Rhineland campaigns.

Private First Class Sadao Hikida, from Waikiki and Audrey’s father’s brother, fought in the Naples-Foggia, Rome-Arno, Rhineland and Central Europe campaigns, including the fighting in the Vosges Mountains.

In Bruyères, Case and Audrey also celebrated mass, marched in a parade and joined a special lū‘au. In his remarks he said:

“Mahalo nui loa (thank you very much)  for your dedication and service in keeping the memory of the 442nd alive these three generations and for forging our strong bond between the peoples of Bruyères and Honolulu, France and the United States…”

Case is a member of the House Committee on Appropriations and of that committee’s Subcommittee on Military Construction, Veterans Affairs and Related Agencies, which is responsible for oversight of the American Battle Monuments Commission and its 26 permanent American military cemeteries abroad. In that capacity, Case also inspected and toured the Épinal American Cemetery, close to Bruyères.

Épinal is the final resting place of 5,255 Americans, among them 12 soldiers from the 442nd, including two who enrolled from Hawai‘i: Staff Sergeant Tomosu Hirahara and Private Yoshio Tengwan. Case and Audrey paid their respects and placed wreaths at their graves.

On Oct. 19, Case spent the day in Stuttgart, Germany at the headquarters of the United States European Command (EUCOM) and Special Operations Command Europe (SOCEUR), where he was briefed on defense issues in those commands’ area of responsibility with a focus on military construction and quality of life matters. He also had lunch with service personnel from Hawai’i. Later he met with Consul General Kara McDonald of U.S. Consulate General Strasbourg, with whom he discussed France’s activities in the Indo-Pacific.