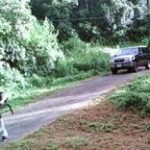 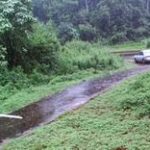 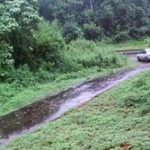 Authorities are reaching out to the public to identify suspects connected to a burglary in South Kona.

On two separate occasions an unidentified male entered a residence on Papa Bay Drive in Captain Cook, the first on Oct. 5 and the second on Oct. 14, according to a press release from Hawaii County Police Department issued today.

A security camera on the property captured an image of the suspect on both occasions. On Oct. 5, police say, an unidentified male came to the property between 1:30 p.m. and 1:45 p.m. Surveillance footage showed the individual walking up the driveway toward the residence. There was forced entry into the residence via a sliding window. The suspect then was then seen walking back down the driveway toward a light-colored sedan with an unknown type of building material in his hand that came from the residence.

The incident on Oct. 14 occurred in the morning, sometime between 10:10 a.m. and 10:15 a.m. The surveillance camera depicts an unknown male walking up the driveway towards the residence. Moments later, the camera captured the male suspect walking down the driveway toward a dark-colored Ford Explorer-type vehicle with an item that came from within the residence.

The tentatively estimated value of stolen items is $350.

Anyone with information regarding the identity of these two suspects is urged to contact Officer Aaron Yamanaka of the Hawaiʻi Police Department at the Kailua-Kona Police Station at 808-326-4646 ext. 259 or on the department’s non-emergency line at 808-935-3311.