Volunteers on paddleboards were out with the sun on the morning of Saturday, Oct. 12, 2019, for the VEGA IRONMAN World Championship. PC: Tiffany DeMasters

The VEGA IRONMAN World Championship is well underway, with the competition and the weather both beginning to heat up as the race rounds the two and a half-hour mark.

German Jan Frodeno, a two-time champion and one of the names to watch when Saturday began, pulled from fourth place into first place a little before 9:15 a.m. at roughly the 55-mile marker on the bike course.

Frodeno finished the 2.4-mile swim neck-and-neck with Josh Amberger and Alistair Brownlee, both of whom have fallen back as the race’s second leg progresses. American Tim O’Donnell, who finished fourth in Kailua-Kona in 2018, is currently in fifth.

Lucy Charles-Barclay, of Great Britain, cleared the swim course in just over 49 minutes and continued to hold the lead through 47 miles on the bike course.

Germany’s Anna Haug, who finished in third place in 2018, was tailing Charles by less than 10 seconds as of the most recent tracker update. 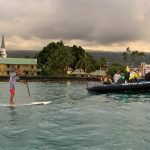 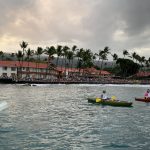 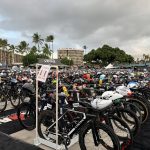