The men’s and women’s leaders have finished the VEGA IRONMAN World Championship bike course and are making their way through the marathon toward the finish line. Saturday, Oct. 12, 2019. PC: Tiffany DeMasters

US triathlete Tim O‘Donnell hit the final leg of the 2019 VEGA IRONMAN World Championship a little before noon on Saturday running in second place.

The marathon was harsh to O’Donnell in 2018, as he struggled down the stretch and fell off the podium into fourth place.

“My coach … and I joked that I only had one dark patch during my race last year, but it was 13 miles,” O’Donnell said at a pre-race press conference Thursday. “So I’m going to try to keep that a little bit shorter.”

O’Donnell — the United States’ best hope to dethrone Germany, which has won the men’s professional division each of the last four years — has struggled with injury all season. He suffered from broken ribs early in the year before sustaining a foot injury a couple of weeks ago.

Saturday’s start in Kailua-Kona was just O’Donnell’s third of the season.

“I’ve never felt so fit and not been able to show it throughout the year,” he said. “(I hope) the third time’s a charm.”

O’Donnell has his work cut out for him, however, as the man he trails is Germany’s Jan Frodeno. A two-time IRONMAN World Champion in 2015 and 2016, Frodeno missed last year’s event with a stress fracture in his hip.

Frodeno can become only the fourth man in history to win the IRONMAN World Championship in Kailua-Kona three times. He outswam O’Donnell by 7 seconds on the race’s first leg, with a time of 47:31. Frodeno followed his swim with a bike run that clocked in at 4:16:03.

Based on numbers provided by the tracking app, Frodeno began the 26.2-mile run 1 minute and 27 seconds ahead of O’Donnell after factoring in transition times from the swim to the bike course and the bike course to the marathon.

Two-time defending champion Patrick Lange, of Germany, pulled out of the 2019 VEGA IRONMAN World Championship on the bike course. Initial reports from official IRONMAN sources indicate his withdrawal likely had something to do with a fever he developed Friday evening.

Lucy Charles-Barclay, of Great Britain, finished second at the 2018 World Championship. She took an early lead in his year’s event with a swim time of 49:02 — a lead she has yet to relinquish.

Charles-Barclay finished the biking portion of the race in a time of 4:47:21. She took to the marathon course in first place a little before 12:11 p.m. Saturday afternoon.

Check out BigIslandNow.com for details on how to stream the race live. 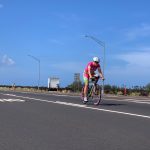 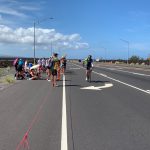 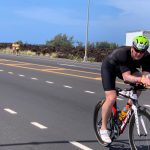 All black may not be the best way to beat the heat at the VEGA IRONMAN World Championship event, but this prospective IRONMAN gives it his best shot on Saturday, Oct. 12, 2019. PC: Tiffany DeMasters