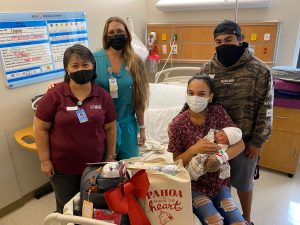 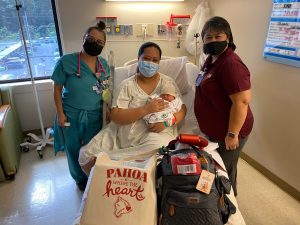 Tihani Oliveira didn’t even have time to get to the hospital. Her baby was coming — ready or not.

“I told my husband I was not going to give birth in the car,” Tihani Oliveira explained.

Tihani Oliveira and her husband Eisen worked together to bring their son into the world.

“I was scared, but she [my wife] encouraged me and I told her when to push,” Eisen Oliveira recalled.

The couple was on the phone with EMS the entire time as the woman on the end of the line guided them in the delivery.

“I was focused on getting him out,” Eisen Oliveira recounted. “When I looked, I saw his hair.”

At 3:24 a.m., Eisen Oliveira caught the newborn in his arms with a towel in their bathroom. EMS told them to tie off the umbilical cord and arrived shortly after to take them to Hilo Medical Center. The Christmas baby weighed 8 pounds 2 ounces and measured 20.5 inches.

Qrimsen Ezekiel Oliveira is the third addition to the Oliveira family, joining his older sister 4-year-old Unique, 2-year-old and Quinston.

“It’s a God-given gift,” said Tihani about her Christmas delivery that her dad had predicted. “We are blessed beyond measure. We’ll never forget this.”

Originally named Ariella, the Noa-Vae’s changed her name to Noella for Christmas. Her first middle name, “Lessina,” honors her father’s grandmother. Her second middle name translates to: “Thanks be to God for His indescribable gift.”

Both Christmas babies and their families were presented with packed Christmas gift bags from The Kea‘au Eagles, a service organization, wishing these families the very best for a wonderful start.