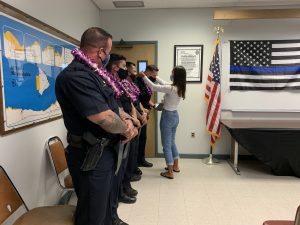 Kawena Haserot presents lei to Hawai’i police officers who responded to the November crash where they saved her life. (PC: Tiffany DeMasters) 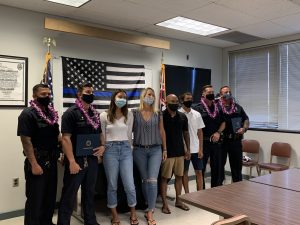 Hawai’i Police Officers and Haserot family pose for a photo together after officers were recognized for their live-saving measures during a November crash. (PC: Tiffany DeMasters) 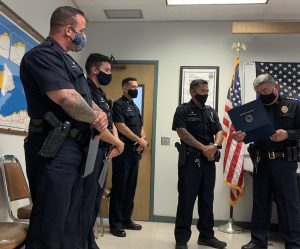 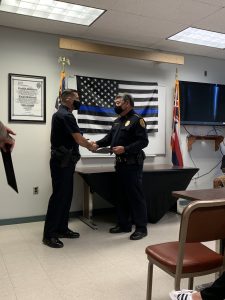 The Haserots were overwhelmed with gratitude as they watched four Hawai‘i police officers receive recognition for their lifesaving efforts after a head-on collision would have otherwise ended their daughter’s life.

“My daughter wouldn’t be here without you guys,” Laurel Haserot said Friday in the conference room at the Kona police station. “Thank you so much.”

On Friday afternoon, Officers Patrick Robinson, Adam Hanes, Preston Paglinawan, and Justin Uresti were each recognized with a Certificate of Merit for their response to a fatal crash on Queen Ka‘ahumanu Highway on Nov. 10, 2019, that left one person dead and injured multiple others.

Officer Kayli Carr and former Officer James Rome also received a Certificate of Merit but were not at Friday’s event. All officers who responded to the crash had less than five years of experience on the force.

Robinson was also awarded the Bronze Star for applying a tourniquet to Kawena Haserot, who would’ve bled out without the officer’s fast action. Lt. Edwin Buyten said he could only recall three bronze star medals that were ever awarded during his 20-year career at the police department.

“Not a day goes by that I don’t look at my daughter and see you four guys,” said Kawena’s father Daniel Haserot.

Buyten was shift commander the day of the incident. At the time, the lieutenant described the crash as probably “the most violent impact I’ve ever seen.”

“The officers beat the fire department to the scene, which is rare,” Buyten explained. “These officers performed above and beyond the normal standard.”

Buyten added that the community members who stopped also were amazing in assisting.

“In this scenario, it took a village,” he said.

Kawena presented a purple orchid lei to each officer. After the ceremony, she expressed her gratitude for their help that day.

“I don’t know how I could ever repay them,” she said.

Kawena doesn’t remember much of the crash as she was unconscious when she was pulled from the car. She does remember gaining consciousness while lying on the road.

“There was an officer there, holding my hand telling me everything was going to be OK,” Kawena recalled Friday.

That officer was Robinson.

Robinson was the first officer on the scene. On his way to the crash, he recalled dispatch to report a vehicle on fire and people trapped inside.

When he got to the crash, which was happened just before the entrance to Kua Bay, the first thing he saw was an engine in the road. He immediately found people trapped in a car. His next decision was based on the priority of life. That’s when he pulled Kawena from the car and applied a tourniquet.

Robinson said not a day goes by that he doesn’t see Kawena’s face.

“This is something that has touched my life indefinitely,” Robinson said.

Robinson said he was completely humbled by the recognition as the rescue was not possible without everyone who rendered aid that afternoon.

“The people who responded are just the best of the best,” he said.

Chief Paul Ferreira was also present at the ceremony and expressed pride in his officers.

“They didn’t stand on the side,” he said. “They knew the dangers involved and acted.”

Ferreira thank the officers for the work they do every single day, especially the day of November crash.