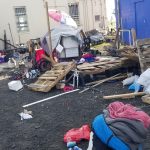 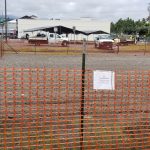 The County of Hawai‘i, the Hawai‘i Island Police Department and various other departments on Tuesday tore down and cleared out a homeless encampment full of illegal structures behind Agasa Furniture in Hilo.

At 6:30 a.m. Tuesday, agencies removed about 12 people and various structures located on a lot behind Agasa Furniture, according to an HPD press release. The operation was completed at about noon Tuesday and now includes fencing and “No Trespassing” signage to prevent any further activity on the property.

The operation was aimed at permanently removing all illegal structures from the lot and included help from HOPE Services Hawai‘i, which offered alternative housing and assistance for the people on the property.

There were four people who took advantage of the services, police continued. The remaining people elected to seek assistance on their own. Police reported that the people who were on the property were cooperative, and there was no enforcement action needed. There was an abandoned vehicle left on the property that was removed.

Appropriate safety measures and use of personal protective equipment were used during the operation due to the COVID-19 pandemic, Hawai‘i County said in a press release. There is no verifiable information to indicate whether any of the persons on the site were infected with the COVID-19 virus.

Prior to the removal operation, County and HOPE officials made many visits to the property to provide outreach services to the persons living on the site.

“It was a joint effort, and it was a long process that involved patience, perseverance and everyone working together,” said Lieutenant Robert Almeida of the South Hilo Community Policing Section, who supervised the police portion of the operation. “We appreciated the cooperation of all people involved. In all, this was a successful operation here.”

During court proceedings held on April 6, 2020, Judge Henry T. Nakamoto granted the County’s Motion for Writ of Attachment, Execution and Sale of the property, wherein the court-appointed Paul K. Hamano, Esq. as the commissioner to oversee the maintenance, execution and sale of the property.

The property is now under the custody and control of the Third Circuit Court and Commissioner
Hamano.

Tuesday’s operation was a County response to complaints about the property, which resulted in a similar initiative about a year ago to remove illegal structures and stop development on the lot without permits.

The defendants in the civil case, Jeri Rose and Michael Ravenswing, previously defaulted and a Final Judgment was entered on Oct. 1, 2019, according to the County press release. To date, the defendants owe the County more than $200,000 in fines and costs, the release continued.