Men of Pa‘a Care for ‘aina in Waipi‘o Valley 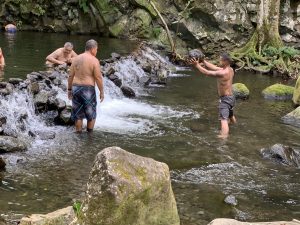 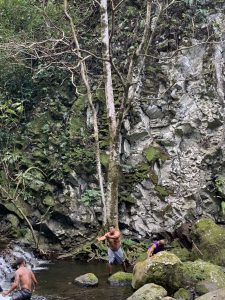 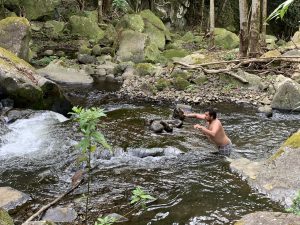 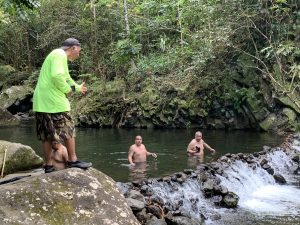 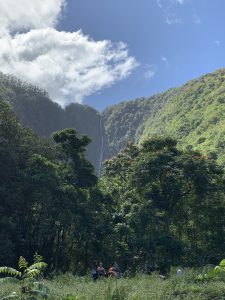 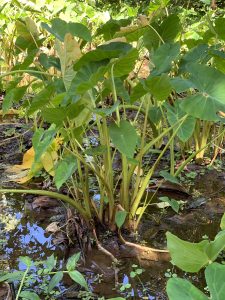 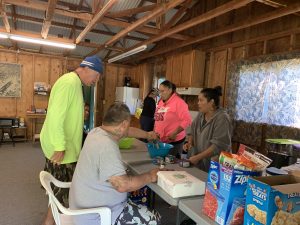 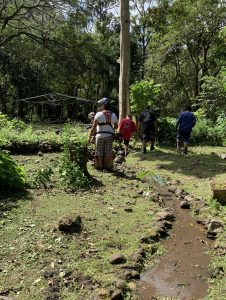 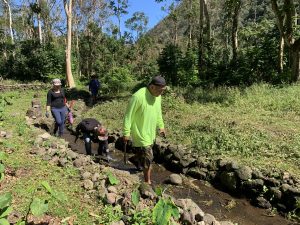 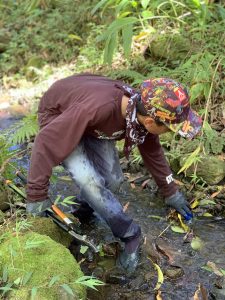 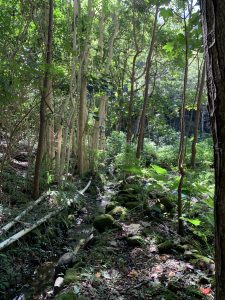 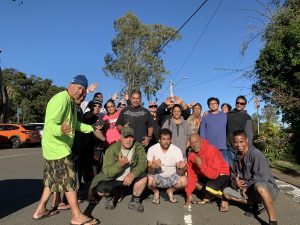 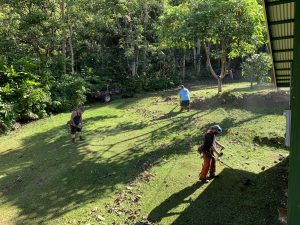 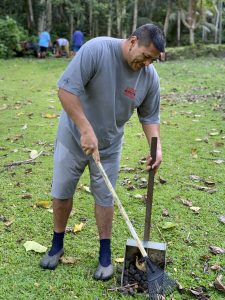 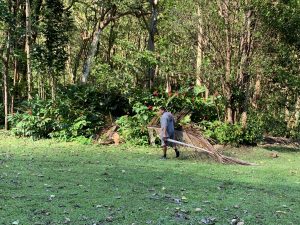 People take the trek to Waipi‘o Valley for different reasons. From the beach to hiking to waterfalls, residents and visitors are drawn to the area’s unadulterated beauty.

But for the Men of Pa‘a, Waipi‘o Valley is a sanctuary, a place that allows them to care for the land and connect to their Hawaiian roots.

“It brings a calmness within me,” said Pa‘a member Mano Hanohano.

On Saturday morning, a dozen members of the nonprofit group gathered at the Waipi‘o Valley lookout to spend the weekend doing mālama ‘aina (care for land) in Napo‘opo‘o Valley. The journey started with an oli (chant) and prayer. All were eager to get to work.

Based in Puna, the group volunteers and provides community service on a regular basis. However, once a month they take a weekend to mālama ‘aina in Waipi‘o Valley, on land managed by the Hawaiian culture-based nonprofit Edith Kanaka‘ole Foundation. They also care for lo‘i kalo (taro patches), which when ready they harvest and make poi.

The Men of Pa‘a is an organization dedicated to helping men stay clean and sober through community service. Founder, Iopa Maunakea, said the group allows the men to become productive members of society — the family benefits and in turn the community benefits.

As the men, joined by women and children pulled up to the EKF grounds, it was nothing but green. Still slightly shaded by the valley mountain, Maunakea hopped out of his truck and opened the gate. He explained this area was created by the foundation for the purpose of connecting Hawaiians back to their culture through the ‘aina.

As soon as the group was through, they set to work, dropping off sleeping gear in the dorm room, women headed to the kitchen house for lunch prep and men unloaded weed whackers, leaf blowers and other tools.

Their day was a journey that followed the auwai (engineered waterways) through lo‘i kalo to the po‘o wai (head of the stream), where they repaired a dam.

Carlos Bellotto, 31, of Pāhoa, said his favorite spot is the po‘o wai.

“It teaches me that things might break and fall down, but all I gotta do is put rocks in place and I can accomplish anything,” Bellotto said.

Bellotto joined the group almost two years ago. He is currently living in the group’s clean and sober house in Nanawale. He’s on probation and has been sober since he joined Men of Pa‘a.

“I was living on the streets almost 10 years — into drugs and alcohol — running from warrants, and it finally caught up to me,” he said.

Bellotto said he used to think of the service projects as work, but it’s brought him back in touch with the ‘aina and helped him reconnect with family.

The work they do in the valley is different because he feels the spiritual connection.

“The Men of Pa‘a provides a solid foundation,” Bellotto said. “It teaches forgiveness, service and giving without expecting anything in return.”

Saturday was Ian Paleka’s first time working the valley with the Men of Pa‘a. He raked up large debris, horse manure and cleared the area of dead palm fronds fallen from the coconut trees.

Currently a resident at the group home, Paleka, 46, is undergoing veterans drug court. He’s been clean and sober for seven months.

Paleka said the things he’s learning with the Men of Pa‘a are unbelievable, adding the group works every aspect of treatment.

“The brothers are driven and goal oriented,” Paleka said.

Paleka said he came to Waipi‘o that weekend with an open mind.

“Here, I’m getting culturally back to who I am,” Paleka said. “With the Men of Pa‘a, I’m Hawaiian.”

After working in the yard, men walked up stream to repair the dam. Along the way, they made a stop at the heiau iwi kupuna (bones of the ancestors). There, in the heart of Waipi‘o, they pulled weeds off the rock structure and weed whacked.

After the work, the group took a moment to pay their respects.

At the po‘o wai, everyone was in the water or on the banks, throwing rocks to build up the dam. Also, cooling off from their day’s labor.

Working alongside the men was Lehua Ochmann, 35, with her two sons, Jeremiah, 14, and Zephaniah, 13. The Kona woman explained she met Maunakea and the Men of Pa‘a a month when she and her sons participated in a fish pond project in Kaloko.

While the men continued weed whacking in the yard, Ochmann and her two sons followed Maunakea through the auwai.

“You see how it’s not flowing very much?” Maunakea explained. “We need to clear the stream of debris and branches.”

Ochmann and her sons followed instructions, pulling leaves, large rocks and branches from the water.

“It’s been amazing to have the opportunity to share this with my kids,” Ochmann said.

Ochmann thinks what the Men of Pa‘a are doing in the community is amazing.

“What better way to heal than to put your hands in the dirt, watch something grow and harvest,” Ochmann said.

As they got deeper into the valley, they passed various taro patches. Maunakea lamented how some of the lo‘i weren’t getting water, but was optimistic that their work would change that.

Upon reaching the po‘o wai, Maunakea saw the problem immediately. The dam, he explained had broken down. The men needed to pull the tarp back and re-stack with more rocks.

Back in the kitchen, two women worked to prepare meals and offer support.

Katrina Esche, 48, of Hawaiian Paradise Park, came down with her boyfriend James France. Since France has been with the Men of Pa‘a, Esche said, he’s more confident and open.

“I need to support him in what he needs to do with his sobriety,” Esche explained.

Originally from O‘ahu, Esche also wanted to get in touch with the ‘aina.

“Coming here is empowering,” Esche said. “You feel the mana in the air.”

Pa‘a means firm, solid, immovable. It also serves as an acronym for Positive Action Alliance. Maunakea started the organization in 2004. The group follows a 12-step Alcoholics Anonymous program with community service and mentorship as key components to its success.

“My job is to help guide these men — give them a sense of belonging and family,” Maunakea said.

In 2012, the group became a nonprofit organization. Currently, there are 20 men involved with the Men of Pa‘a with 10 of them living in the group home.

Men of Pa‘a is not a program someone is court ordered to attend. The men are there by choice and can leave when they want. The only requirement to remain part with Men of Pa‘a is working toward sobriety.

Hanohano and Curtis Leialoha have been with Men of Pa‘a since 2007.

Hanohano stays because it keeps him strong in his sobriety. It’s also an opportunity to help the younger men reconnect with their families.

“we’re building a bridge so someone else can build in the future,” Hanohano said.

The Men of Pa‘a are now a fixture in the Puna community through service and volunteer work.

“We became leaders in our community, gathering our people to do something in Puna,” Maunakea said.

The bigger picture for the Men of Pa‘a is to serve Puna in a larger capacity, more efficiently.