IRONMAN Brings Out the Human Spirit

The excitement of IRONMAN has been building over the past week as athletes and spectators have prepared for race day in Kona today.

It isn’t just a race for the millions of athletes who’ve participated in the IRONMAN World Championship throughout the years. It’s an opportunity to test their limits and accomplish a physical feat. 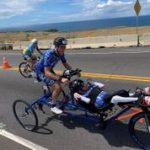 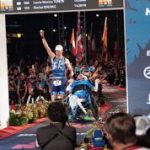 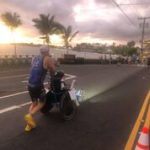 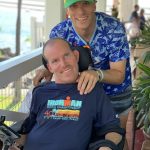 As IRONMAN Foundation ambassadors last year, two siblings did just that, becoming the first pair of brothers to finish the world-renowned race. Brent Pease, 36, towed, pedaled and pushed his 34-year-old brother Kyle, who has cerebral palsy, across the 140.6-mile course. They crossed the finish line in 14 hours and 29 minutes.

“When you come to a race like this, you see the human spirit come out,” Kyle said. “You focus on good people doing good things for their community. That’s what I love about this sport. It’s a big family atmosphere.”

Sitting on the lanai behind Foster’s Kitchen on Wednesday, the brothers expressed their gratitude and excitement to be back in Kona a year later to watch the race from the sidelines and support friends who are tackling the course as they did.

“It’s a little bit of a victory lap to see the island from a different lens — not racing, not having that anxiety or that angst going into it,” Brent said.

The Pease brothers are supporting two teams and friends from Atlanta who are racing as well. One those teams is a father-son duo, Jim and Michael Payih of Fort Lauderdale, Florida.

Sayih has been racing with his son, now 27, since he was 5 years old. Diagnosed with cerebral palsy as a child, it as not stopped the pair from taking on marathons and triathlons. 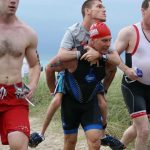 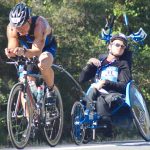 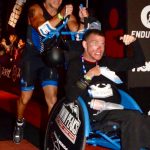 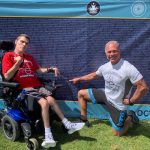 Jim and Michael ended up meeting the Pease brothers and quickly became friends. With the Pease Foundation in Atlanta and Special Compass in Florida, the two families have come together with their nonprofit organizations in a collaborative effort and partnership to improve the lives of others.

“To be here it really is a dream come true,” Jim said Friday. “I know he (Michael) wanted to do an IRONMAN, and here we are.”

Knowing they will be accomplishing their dream is indescribable, Jim said.

“It’s not easy to get here,” he said. “And everyone wants to come because it’s iconic and magical.”

Jim is grateful for his friendship to Brent and Kyle and is glad they will be there cheering on him and his son.

“We hope when we cross this finish line those in a similar situation see they can do anything,” Jim said. “Don’t let your circumstances keep you prisoner inside.”

Diagnosed with cerebral palsy as a child, Kyle Pease has never let his disability keep him off the race course. The brothers’ journey to Kailua-Kona wasn’t easy. Since 2011, the brothers have raced together in several events.

If there’s one message Kyle could share with people it is to not let anything stop them.

“In my opinion, the only person who is stopping you from achieving your goals is you,” Kyle said. “And once you remove yourself, then the sky is the limit.”

Brent hopes he and Kyle can race again at IRONMAN in Kailua-Kona.

“While we still have the physical and mental ability to do this, we want to, because one day we may not have the ability or even the enjoyment in it,” Brent said. “For now we do and we love that we get to share that with so many other people.”

Brent and Kyle are also sharing a memoir they wrote together about their journey to the IRONMAN World Championship 2018.

Also racing this year are Beth and Liza James. Beth was a single mom of three when she and her children were in a severe car accident 14 years ago. Her youngest child, Liza, then 6, endured a blow to the head that left her with a traumatic brain injury.

Today, Liza, 23, is non-verbal and unable to walk. Thanks to her mom, Liza now travels the country, swimming, biking, running and even climbing mountains as they compete together as an inspirational mother-daughter duo. Beth and Liza could become the first female duo to ever finish the IRONMAN World Championship.

They are IRONMAN ambassadors this year.