No more advisories will be issue for Juliette.

11 AM: JULIETTE DEGENERATES INTO A POST-TROPICAL CYCLONE

Juliette is moving toward the west near 13 mph and this general motion with a gradual decrease in forward speed is expected through Tuesday.

Maximum sustained winds are near 40 mph, with higher gusts.

Gradual weakening is expected during the next few days and the low’s maximum winds should drop below gale force by tonight.

Tropical-storm-force winds extend outward up to 60 miles to the north of the center.

An area of low pressure associated with the remnants of former Tropical Storm Akoni, located about 550 miles SSE of Hilo, is producing a broad area of disorganized showers and thunderstorms. Environmental conditions are only marginally conducive for regeneration of this system over the next several days as it moves northwestward.

5 AM: JULIETTE LIKELY TO BECOME A REMNANT LOW LATER TODAY 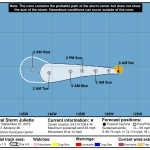 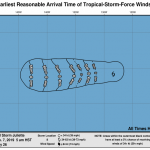 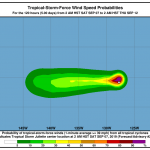 Juliette is moving toward the west near 12 mph. Now that the cyclone has become shallow, it is expected to be steered generally westward by the low-level trade winds. This general motion is expected to continue through the middle of next week.

Maximum sustained winds are near 45 mph with higher gusts.

Gradual weakening is forecast during the next several days and Juliette is expected to become a post-tropical cyclone later today.

Tropical-storm-force winds extend outward up to 70 miles from the center.