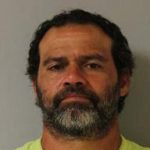 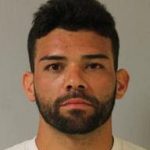 Hawaiʻi Police Department detectives have arrested and charged a father and son with several offenses stemming from a traffic-related altercation on Wednesday afternoon, April 1, in Keaʻau.

The individuals arrested and charged are identified as 43-year old Chad Emmet Vierra, and his son, 23-year-old Koapaka Naaualii Vierra.

On Wednesday afternoon shortly before 5 p.m., Puna Patrol officers responded to the area of the Keaʻau Bypass Road (Highway 130) and Railroad Avenue for a report of two vehicles chasing each other and one of the male drivers firing a gun at the other vehicle.

Officers contacted the adult male victim who reported that he and an acquaintance (Chad Vierra) had recently been involved in a verbal altercation, during which Vierra pointed a handgun at him. Both vehicles then left the area and subsequently began a back-and-forth of chasing each other. The victim reported that during the incident, Vierra fired several shots towards him. Shortly afterward, Vierra’s son, Koapaka, arrived in the area and reportedly intentionally rammed his vehicle into the passenger side of the victim’s vehicle.

Both Vierras were arrested and their vehicles were recovered and towed to the Hilo Police Station, pending execution of search warrants.

After being charged on Thursday, both individuals posted bail and have been issued a court appearance date on May 26 in Hilo District Court.

Police are asking anyone who may have witnessed this incident to call the police department’s non-emergency number at 808-935-3311.

Police want to remind the public that in light of the current COVID-19 (coronavirus) Emergency Proclamations in place, there are enhanced penalties for certain crimes, including but not limited to burglary, theft, criminal property damage and robbery.