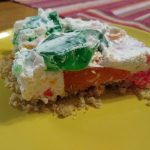 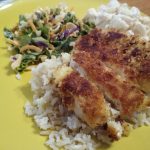 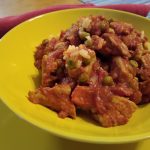 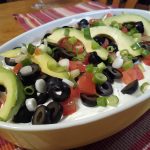 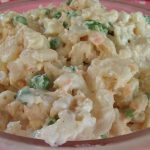 Big Island folks, the holidays are coming — and so are the office potlucks. Don’t be caught with a pot of something that gets ignored. Here are five guaranteed “ono” dishes that will get eaten.

As a former Californian, I confess that yes, I was a brainwashed victim of food snobbery. If I had taken a Jello dish to a California potluck, I’d have been taunted. The joke is on them, though, because Hawai‘i has elevated Jello to an art form. There are no ugly Jello recipes, here. It’s stacked in layers, paired with cream cheese on a crust, nestled in silver wrappers — you get the idea. It looks pretty, and it tastes great. I am not a good constructor of fancy Jellos, obviously, but Broken Glass Dessert is a fairly forgiving recipe.

Pounded thinly, dredged in flour and egg, dipped in breadcrumbs and fried — it’s a wonderful way to eat fried chicken. Normally, it is served with a tart, salty-sweet sauce for dipping. The Junior League cookbook, of the San Francisco chapter, adds a little shredded asiago cheese to the panko crumbs. Sacrilege, you may shout, but it’s really very good and adds a nutty flavor to the crust. Side benefit: If you’ve had a bad day, there is nothing like pounding a chicken breast to ease your aggression.

This is a Filipino recipe. I’ll never get mine to be as good as the ones I have tasted, but I’ll keep trying. You’ll be a hero if you sign up for the potluck to bring a crock-pot full of pork and peas. It’s always popular. Most recipes call for a tablespoon of fish sauce, but you can substitute Worcestershire sauce if you don’t have fish sauce around. This recipe made it easy.

I’m not sure potlucks are allowed to take place unless someone brings this dip. There seems to be a rule, because it’s always there. I’m not complaining, though, because I love the stuff. You can add ground beef or turkey or just go with re-fried beans if you have vegetarians around. Hawai‘i avocados are superior to others, so pile those on.

Flyover states think they have potato, or mac salad, in the bag. Nuh-uh. Hawai‘i has potato-mac salad superiority. They’ve combined two starches, rendering the most delicious part of a plate lunch. Most recipes in my Hawai‘i cookbooks specify the use of Best Foods mayonnaise, interestingly. Also, don’t worry about cooking “al dente” macaroni. You want that stuff to be “soft,” not “firm to the bite.” Alternatively, buy it in the deli. We don’t all have time to peel potatoes or boil macaroni. If you do want to make it, I like Foodland’s recipe here

Still at a loss? No worries — sign up to bring the paper goods or drinks. Have a better potluck idea? Let’s hear it in the comments!